The Ultimate Guide to the Power Root Turmeric Curcumin

More than 700 years ago, legendary Italian explorer Marco Polo was traveling through Asia… somewhere most people from the west had never been before.

When he stopped in India, he found something that impressed him so much, he wrote about it in his diary. He described it as “a vegetable with the properties of saffron, yet it is not really saffron.”

Fast-forward to today, and it seems most of us are only just discovering how amazing turmeric is. Sure, you probably know it’s popular as a spice. It adds flavor, aroma and a beautiful golden color to soups, stews, curries and more.

But thousands of scientific studies have been done on turmeric. And they show that its anti-inflammatory properties could have lots of positive impacts on human health. Research suggests it has therapeutic potential in everything from arthritis and brain function, to depression and certain types of cancer. It may also help fight against the chronic, low-grade inflammation that leads to bone loss.

Now, before we get to all the incredible things turmeric can do, let’s take a minute to discover what it is.

First of all, Marco Polo didn’t really “discover” turmeric. Far from it! In fact, it’s thought that people in India have been using turmeric for around 4,000 years. (It later found its way to China and Africa.) And although Marco referred to it in his diary as a vegetable, turmeric is actually a rhizome… a horizontal root. His comparison of turmeric to saffron did stick, though — to this day, it’s also known as “Indian saffron”.

Turmeric belongs to the same plant family as ginger, which you can tell from their similar appearance. But one major difference with fresh turmeric root is the color inside… a beautiful orange-yellow, like a carrot. That color is the reason turmeric is used as a natural dye in foods like curry powder, butter and mustard. It’s also used to dye textiles.

The earliest use of turmeric for medicinal purposes was in Ayurvedic medicine, or Ayurveda… a natural, holistic medical system that originated in India more than 5,000 years ago. Ayurveda is now popular around the world, but especially among Asian populations. Ayurveda practitioners have looked to turmeric for centuries. They’ve used it to treat respiratory conditions, as a topical antiseptic for wounds, to soothe digestive issues, and much more.

But here’s an important point. It’s not turmeric itself that keeps researchers coming back. It’s a particular compound in turmeric called curcumin.

Turmeric gets its color from polyphenol compounds (or pigments) known as curcuminoids. And curcumin is the main curcuminoid in turmeric.

Turmeric contains a very small amount of curcumin (typically less than 5%). But curcumin has shown so much potential in the treatment of so many health issues, it’s been the subject of thousands of studies on its own. That’s why curcumin is recognized as a nutraceutical — a food or supplement that offers health benefits.

There are 65 clinical trials that show curcumin’s promising positive effects on things like diabetes, cancer and cardiovascular disease. What’s more, there have been more than 6,000 peer-reviewed scientific articles published in the last two decades discussing its effectiveness and benefits. And there are new studies being launched all the time.

One area of study where turmeric curcumin has shown the most impressive results is fighting inflammation. And this is especially important if you’re concerned about your bone health. Read on to find out how these things are connected. Plus… discover one of the easiest ways your bones can start benefiting from turmeric curcumin right now. 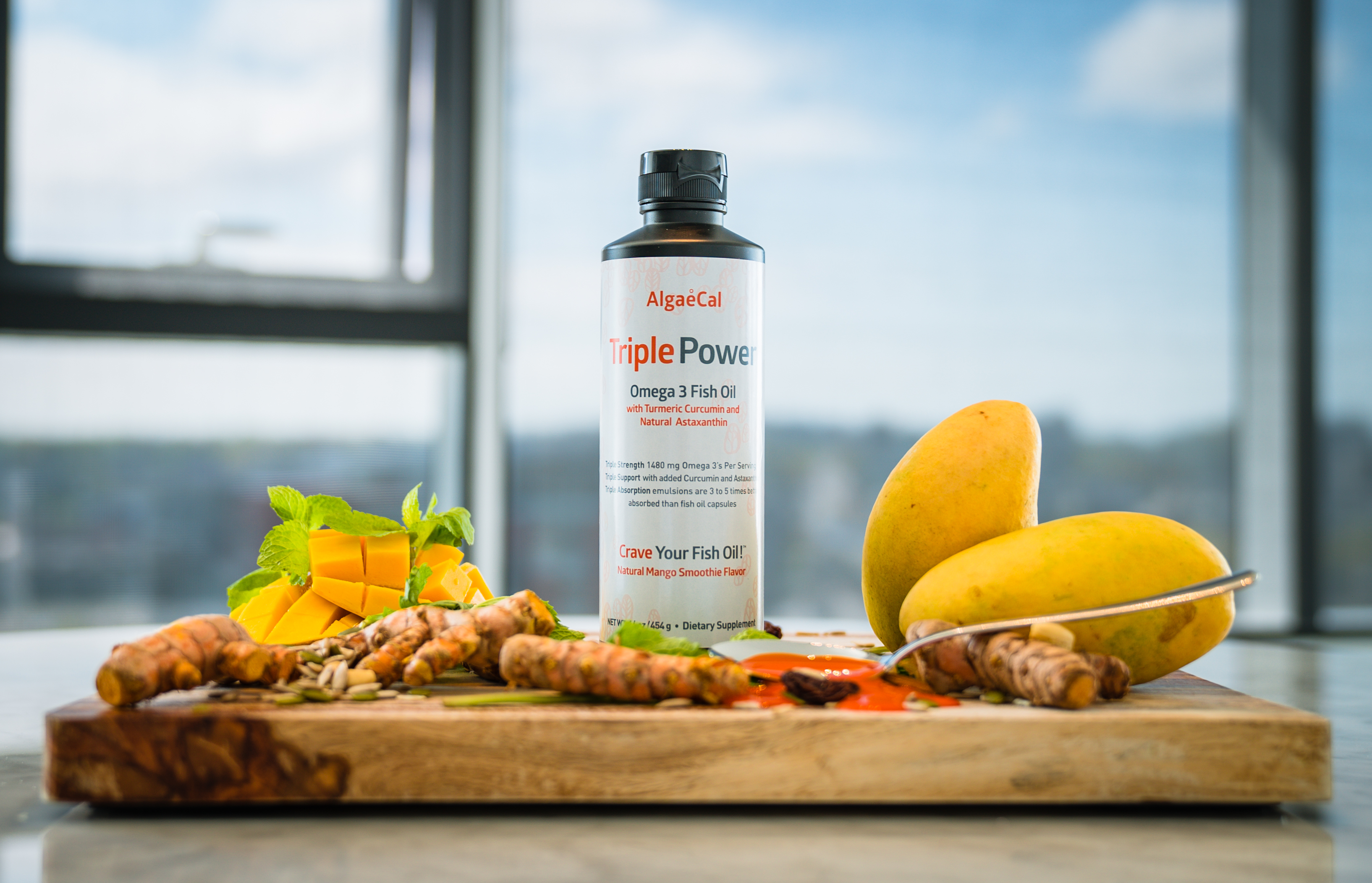 One thing most scientific studies about turmeric curcumin have in common is… they all talk about how it reduces inflammation. And as I mentioned, this can be very good news for your bones!

Now, the link between turmeric curcumin’s anti-inflammatory abilities and your bone health may not seem obvious at first. But once you understand how bones stay healthy in the first place, it becomes clear.

You see, throughout your life, your old bone is continually broken down by cells called osteoclasts. Then, another group of cells called osteoblasts builds new bone to replace it. This is the normal bone “remodeling” process.

But as you get older, old bone starts getting broken down faster than new bone can replace it. If this process continues, osteoporosis is the result.

The good news is… you can drastically reduce or eliminate inflammation by avoiding a pro-inflammatory diet consisting of things like refined sugar, excessive alcohol, and cola-type sodas. And when you introduce anti-inflammatory foods and supplements like turmeric curcumin and omega 3 fish oil, you defend yourself against inflammation a lot more.

Research shows curcumin has huge anti-inflammatory properties! In fact, one study published in Oncogene (one of the world’s leading cancer research journals) showed that curcumin was more potent than acetylsalicylic acid (Aspirin) and ibuprofen (Advil) when it came to suppressing inflammation and blocking the process of tumor-cell proliferation.

That’s why AlgaeCal created Triple Power Omega 3 Fish Oil, which contains organic turmeric curcumin as one of its main ingredients.

Curcumin may provide an effective, less expensive, and more tolerated option for inflammatory bowel disease (IBD). In one study, participants were given a 360 mg dose of curcumin three to four times per day for three months. The results showed it helped discourage inflammation. This suggests it’s a bright prospect as a treatment for IBD.

Takeaway: Curcumin may be a useful treatment for IBD, but more research is needed.

Curcumin shows great promise in the treatment of arthritis symptoms. In a preliminary double-blind, randomized trial, curcumin was shown to reduce tenderness and swelling of joints, with no adverse effects.

For years, it was generally thought that the brain was insensitive to insulin. But now we know that’s not the case. In fact, insulin plays important roles in learning and memory. So, insulin resistance is a key pathological feature of Alzheimer’s disease. Studies have investigated the effect of curcumin on brain insulin receptors, memory function, and oxidative stress…. and it looks encouraging.

Takeaway: Curcumin is shown to have positive effects on neurodegenerative disorders like Alzheimer’s. Research is limited, but results suggest curcumin may have a protective effect on dementia due to its ability to affect insulin receptors.

Curcumin’s anti-inflammatory, anti-thrombotic (decreases blood clots), and anti-proliferative (inhibits cell growth) properties are well known. Curcumin is being studied as a potential supplement in both the treatment and prevention of many types of cardiovascular disease. Studies show strong connections and promising effects… including the potential to reduce the risk of heart attacks.

Takeaway: If heart disease runs in your family, or you may be at risk of it, look into the potential benefits of curcumin.

One powerful clinical review showed the many ways curcumin may be beneficial in treating and preventing cancer. Specifically, by changing the actual pathways through which cells multiply and regenerate. That’s on top of curcumin’s ability to cause changes to the way cells’ organelles function, killing tumor cells while leaving healthy cells alone.

Takeaway: With a little more research, we may soon see curcumin as both a potential prevention and treatment for cancer.

Traditional Chinese Medicine has used turmeric to treat depression for a long time. Now, an analysis of several clinical studies shows that curcumin had a significant effect on symptoms of depression and anxiety. But because those studies involved a small number of people, researchers say more studies will need to be done to offer stronger proof.

Takeaway: Curcumin shows potential as an approach to depression and anxiety. So keep an eye out to see what further scientific research shows.

While there’s a lot of science supporting the benefits of turmeric curcumin, there’s not yet a standardized recommended dosage.

Many nutrients come with an “upper-intake level” — a maximum dose you shouldn’t exceed. Right now, turmeric curcumin doesn’t have one, because it hasn’t shown any prolonged or severe side effects. Various clinical trials have shown that consumption of up to 8 g per day is safe.

Turmeric curcumin is safe to consume in foods and supplements. As with anything, though, if it’s taken in mega-doses, you may experience some side effects… especially if you don’t slowly build up the amount you take in.

General side effects include nausea, diarrhea and headache. For individuals with diabetes, gastroesophageal reflux disease (GERD), depressive disorders, fertility concerns, bleeding disorders, or who are pregnant, you should speak with your doctor before adding large amounts of turmeric to your food or supplementing with curcumin. There’s a good reason why turmeric has been used in cooking for thousands of years. It adds unique, delicious flavor and aroma to foods. And there are countless recipes that make it easy to add turmeric to your cooking.

If you look for turmeric at your local grocery store — either powdered or fresh roots — make sure it’s certified organic. This is especially important with powdered turmeric. Organic certification helps ensure it hasn’t been contaminated with dangerous materials like lead.

Below are some favorite recipes I’ve discovered that I hope you’ll love as much as I do! Use the comments section below to let me know which ones you like best!

We also have drink recipes too…

Sometimes it’s nice to drink your nutrients. That may be a reason turmeric tea and turmeric lattes (also known as golden milk) are gaining popularity.

Check out our delicious versions below!

To get the most out of turmeric curcumin, pair it with black pepper. Black pepper increases curcumin’s absorption, which means it’ll work better for you. The two spices make a delicious pairing, too, so it’s easy to find recipes calling for both.

An even more powerful partner for turmeric curcumin is omega 3 fish oil — something supported by scientific studies. You see, the docosahexaenoic acid (DHA) found in fish oil binds with turmeric curcumin and helps it pass the blood-brain barrier. This enhances its ability to have positive effects on brain-related disorders. Turmeric curcumin’s antioxidant properties also help to preserve the freshness of quality fish oil, preventing it from going rancid.

These are yet more reasons why turmeric curcumin is incorporated into Triple Power Omega 3 Fish Oil. A 2-tablespoon serving contains 200 mg of turmeric root extract.

Do you have any further questions about turmeric curcumin? Let us know in the comments below!