The Top 5 Effective and Natural Remedies for Inflammation

Chronic inflammation is the culprit behind many, if not most diseases.

There are plenty of remedies for chronic inflammation out there. But fewer that are natural. And even fewer that actually work.

That’s why the following list discusses the 5 most effective natural remedies for chronic inflammation.

5 Effective and Natural Remedies for Inflammation Turmeric has been used for thousands of years in Asia and India as a healing remedy, textile dye, and a wonderful spice. Turmeric is a root and comes from the Curcuma longa plant. It has a tough darker red/brown skin, but when you cut the root, it reveals a deep yellow-orange color. The flavor is peppery, bitter and warm, which has made it popular in many Indian dishes. What makes it so special is the active agent in turmeric, called curcumin.

How it works: There have been over 6,000 peer-reviewed scientific journals published discussing the health benefits of turmeric curcumin. Pain and chronic inflammation is one of them. Curcumin has been shown to possess anti-inflammatory and antioxidant properties. It is so potent, studies have shown curcumin to be as effective as over-the-counter anti-inflammatory drugs. One study, in particular, revealed that curcumin can suppress inflammation just as well as Aspirin and Advil. The upside of curcumin is that it is a completely natural approach to chronic inflammation and pain.

Where to find it: Turmeric powder (and its fresh whole root) can be found in most grocery or health food stores. The powder and root itself are great to use in cooking and drinks. While turmeric contains curcumin, it is only at 2-6%. So if you are looking for medicinal benefits, then it is best to get curcumin through supplements. Curcumin supplements can be found at most health and supplement stores or online. One thing to keep in mind is that humans have a difficult time absorbing curcumin. When looking for a quality curcumin supplement, look for additional ingredients that are shown to increase bioavailability. The most common are piperine (black pepper) or fish oil. Also look for products that are standardized to contain 95% curcuminoids. This will ensure you are getting pure curcumin. But what about 100% curcuminoids? It isn’t needed as purification from 95% to 100% does not increase bioavailability. Doses range from 80 mg – 500 mg per day. A small number of people report side effects such as indigestion, diarrhea, nausea, and heartburn. These should not deter you from taking curcumin as the pros far outweigh the chances of indigestion. Of course, be cautious and listen to your body. Help your body out by slowly introducing it into your diet and working your way up to an optimal amount. Ginger is an aromatic and spicy herb (not in a hot way) that is common in Asian stir-fries, as a condiment for Japanese sushi and many other meat and vegetable dishes. Just like turmeric, it has a tough darker outside, but once it is cut, it reveals a light yellow inside. Ginger is fibrous and needs to be thinly sliced, cooked or pickled in order to fully enjoy. Ginger has long been used to treat gastrointestinal issues such as gas or indigestion. It calms and soothes the intestinal tract, which may also be a clue as to why ginger is also effective for motion sickness.

How it Works: Modern research has discovered that ginger has many therapeutic benefits. “Including antioxidant effects, an ability to inhibit the formation of inflammatory compounds, and direct anti-inflammatory effects.” The potent anti-inflammatory compounds that ginger contains are called gingerols. These compounds are what is said to help reduce pain and improve mobility in patients with rheumatoid arthritis or osteoarthritis. One study published in Osteoarthritis Cartilage followed 29 patients with painful knee arthritis. This was a randomized, double-blind, placebo-controlled study (the gold-standard of research studies). The treatment group was given 250 mg of ginger extract in capsule form, while the placebo group received the same number of identical looking capsules per day. After 3 months of therapy, the groups switched treatments. Results showed that during the first 3 months, the placebo group and the ginger extract group were equally as effective. But at the end of 6 months (3 months after the crossover), the ginger extract group showed significant superiority over the placebo group. Meaning the group that was given ginger extract were experiencing far less pain with joint movement compared to the placebo group. And not only did their pain lessen, but the swelling in their knees also went down. Swelling is an objective measure of inflammation. Another study sheds light on ginger’s anti-inflammatory effectiveness, revealing that ginger suppresses pro-inflammatory compounds.

Where to find it: Fresh ginger can be found in the produce section of your grocery store, year round. You can also buy ginger powder to add to drinks and recipes (which can also be done with fresh ginger). For medicinal purposes,1g- 3g of ginger extract is typically used. Astaxanthin is a naturally-occurring carotenoid. Carotenoids are compounds found in foods that give them their vibrant color. Example: carrots are orange because of the carotenoid, beta-carotene. Astaxanthin, on the other hand, is red and is what gives seafood like salmon, shrimp, lobster, and crab their color. It has been dubbed the “King of Carotenoids” because it is arguably nature’s most powerful antioxidant.

Where to find it: Astaxanthin is found in microalgae. Seafood consumes it making salmon, lobster, and crab the top sources. Sockeye salmon, in particular, is the richest source of astaxanthin. Eating adequate astaxanthin through your diet is unlikely. You would need to eat 3-4 ounces of salmon per day, every day to get the equivalent of 4 mg from a supplement. So while eating salmon every day might not be realistic, taking a supplement is. Astaxanthin supplements can be found at many health food stores and online. When looking at a quality astaxanthin supplement keep in mind that astaxanthin is oil soluble. Meaning its absorption improves when taken with an oil – making fish oil an ideal nutrient companion. 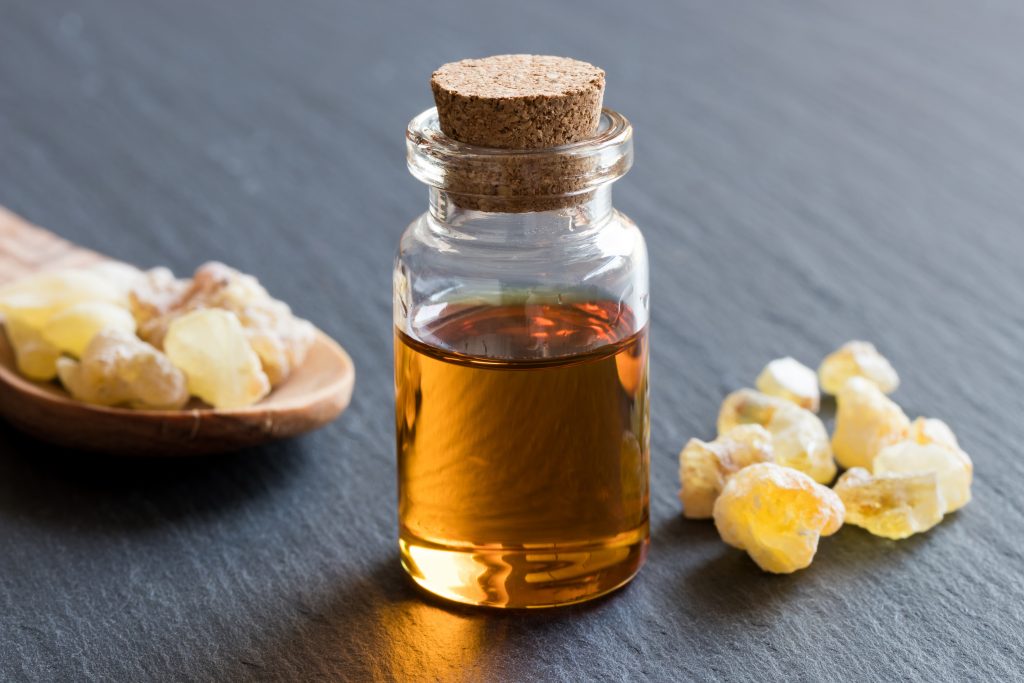 Boswellia extract comes from the gum resin from the Boswellia serrata plant, also known as frankincense. It has been used in incense and perfumes for many years and is warm and aromatic.

How it works: Boswellia has been shown to be effective in treating osteoarthritis, rheumatoid arthritis, and Crohn’s disease. In a randomized, double placebo-controlled trial of 75 patients, researchers concluded reduced pain and improved physical function in osteoarthritis patients. Researchers used 30% 3-acetyl-11-keto-beta-boswellic acid (AKBA) Boswellia extract and participants were split into 3 groups and given either 100 mg, 250 mg or a placebo. After just 7 days, the treatment group given 250 mg of AKBA reported significant improvements in pain and mobility. Researchers concluded that it is not only safe for human consumption but reduces pain and improves physical functioning significantly in osteoarthritis patients. Its beneficial effects may also be due to the ability to control inflammatory responses through reducing proinflammatory modulators.

Where to find it: You can buy Boswellia extract supplements in health food stores and online. The most effective extracts are at a standardized level of 30% AKBA and dosages range from 100 mg – 250 mg. 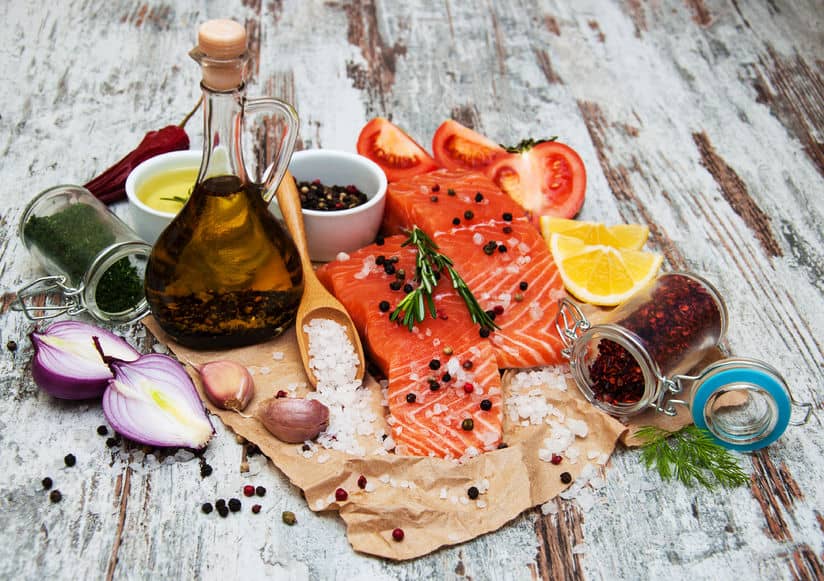 Omega 3 fatty acids are one of the most researched nutrients on the market. Its health benefits, wide-ranging and repeatedly supported, are said to support: heart health, brain health, bone health, nervous system, joint health and bone health. Under the umbrella of omega 3 fatty acids, there are EPA, DHA, and ALA. EPA and DHA strictly come from animal sources such as fresh-water, fatty fish like salmon and sardines.

ALA comes from plant-based foods like flaxseeds and walnuts. Plant-based omega 3 sources are healthy food choices and should be apart of your diet, but they will not raise your Omega-3 Index. The Omega-3 Index is a measure of omega 3 fatty acids (EPA and DHA) in your red blood cells, which relates to your risk of heart disease and many other conditions. In other words, plant-based sources of omega 3 fatty acids in the form of ALA is not the fatty acid that is pivotal to preventing diseases like heart disease, cancer, and many others. You ultimately need EPA and DHA from a fish oil for optimal health.

How it works: Omega 3 fatty acids are well-established and effective anti-inflammatories. And particularly helps suppress inflammation in the brain. Studies have shown that omega 3s are an effective alternative to nonsteroidal anti-inflammatory drugs for chronic neck and back pain. One study instructed 250 patients to take 1200 mg of omega 3 EFAs (EPA and DHA) in the form of a fish oil supplement. (These patients had seen a neurosurgeon and were found to have nonsurgical neck or back pain.) After one month, patients were sent a questionnaire. 59% of patients discontinued their prescription medications for pain. 60% stated that their overall pain had improved and 50% stated that their joint pain had improved. And a whopping 88% said they would continue to take fish oil. The best part? There were no significant side effects reported.

Where to find it: You can find fish oil in most grocery stores and even online. But the vast majority of fish oil on the market today will not provide you with what you need. Their omega 3 doses are too low or the quality is poor…but there is one that is superior.

It’s called Triple Power Omega 3 Fish Oil. And it’s the first fish oil on the market to include 3 of the most effective natural remedies for inflammation. It contains turmeric curcumin, astaxanthin and fish oil! Talk about anti-inflammatory punch!

To find out how you can get 3 of the top 5 natural remedies for inflammation on this list, click here now.

There are plenty of remedies for chronic inflammation out there. But less that are natural. And even less that actually work.

Kidney & Bone Health –The Detox Organ Your Bones Rely On

As we grow in years, it’s time to start paying more attention to t…

Read More Read more about Removing These Toxins Can Improve Your Bone Health, According to Dr. Trubow.
View All Articles